I like this story of Tom Waits driving in his car on the freeway, when suddenly a divine inspiration hits him with the melody of the best song ever to be written. He cries to the Heavens “oh God why now, not now, don’t you see I’m driving? I can’t write down the melody anywhere. Go to Leonard Cohen. He probably got time.”
I may have come up with jokes while driving before.  I have definitely never written a good joke at a desk. Divine inspiration doesn’t like office atmospheres. I write them in bed, in the car like Waits, on the bus like Eminem in 8Mile. And mostly walking. Never go on a hike without a cane, a pen and a piece of paper! I have heard of companies, that made the Mittagsspaziergang mandatory.
Have I worked at a desk? Oh yes! Brooding over a joke, elaborating it, re-rewriting it and finally casting it into the trash bin marked „why did I even think this was funny“? Multiple times. Pedanticus, the God of accuracy and persnicketiness, inhales office air. There is a reason why administrations don’t have ball baths and pin pong tables. Files would vanish and reference numbers smudge. Where is file No. 84692? Eh, somewhere stuck between the lounge seats.
So if walking doesn’t keep the mind going, why not rent a creative office at a gas station or a boxing range? Yes, those exists. And I met the people, who rent them out. Two weeks ago, I got to know the Berlin start-up spacebase, specialized in renting out office spaces – ordinary and not so ordinary. And I hosted their networking event “Club der Office Visionäre” in Hamburg. Thank you for a fun, interesting and tasty evening. Here are some impressions:

I’m celebrating one year of Stand-up for the Ladies. Germany’s only regular stand-up comedy show, that features primarily female comedians. Why? Because we need it! One year! Before starting it, I was inspired by a weekly Open Mic called Hysteria!, that I visited in San Francisco. One year ago, before the first show, some comedians told me, that my mic will take place once and never again. “Because there are no female comedians”. Well, guess for my show, they all left their stove and washhouse exiles. Because somehow we’re still running. And more and more women decide to try out stand-up – and look for a save space to do so. Hell Yeah! Because women have the same right to bomb as men. And since it got around that my show is not “just a Ladies Night” but actually a quality comedy room, more and more male comedians perform there, too. And they don’t have to wear wigs! Some people asked me why men are allowed on stage. Because all comedians are welcome, as long as their only punchline in not “haha that cunt!”. After doing shows for one year, I’m happy and grateful for every performer. On my stage, we have watched women perform stand-up for the very first time and professionals swinging by just for fun. What a treat!

Last week, we had six comediennes on stage. And my dear photographer Sergey Sanin was with us again. I baited him with Hamburg’s best brownies. And, of course comedy – whenever he has time to listen in between releasing the shutter. You can check out his photographs from last week following this link. For this post, I wanted to post like every photo but before I don’t get any sleep at all, I finally made a selection. Will “Stand-up for the Ladies” continue when I move to Berlin? Before I go there for good, there will be two more shows: In April, we have an all English Comedy showcase “Ladies of Laughter” with sets from Caroline Clifford (UK), Carmen Chraim (Lebanon) and me – hosted by Captain Khalid. And the following month, “Stand-up for the Ladies” is back on May 16th. And then we will see about the future.

(All photo credits and rights: Sergey Sanin. You’re allowed to post them when naming him.) 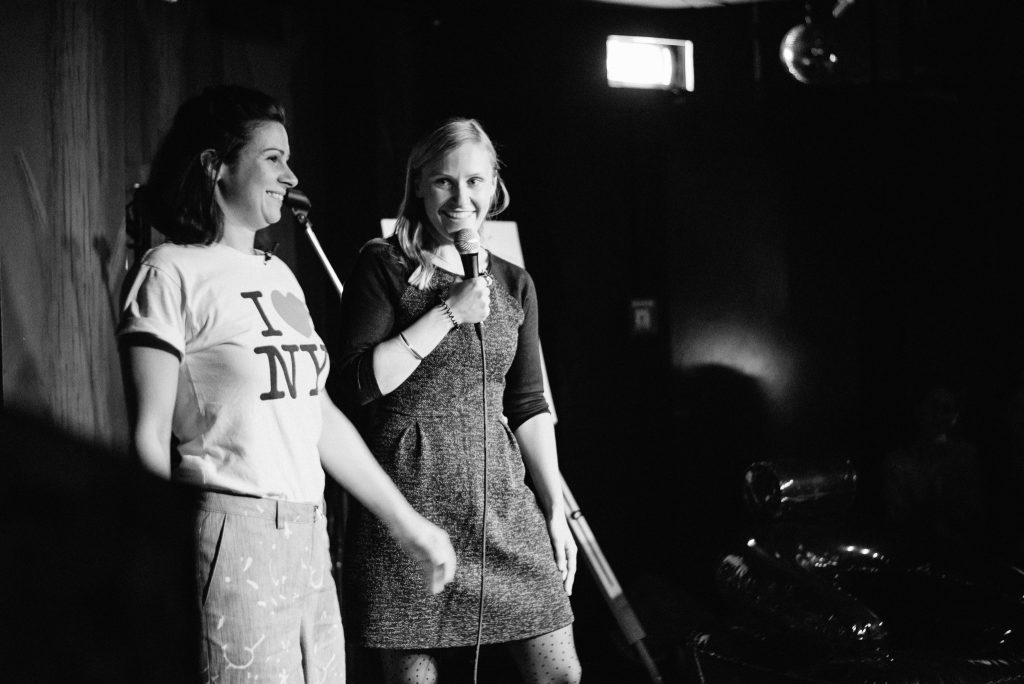 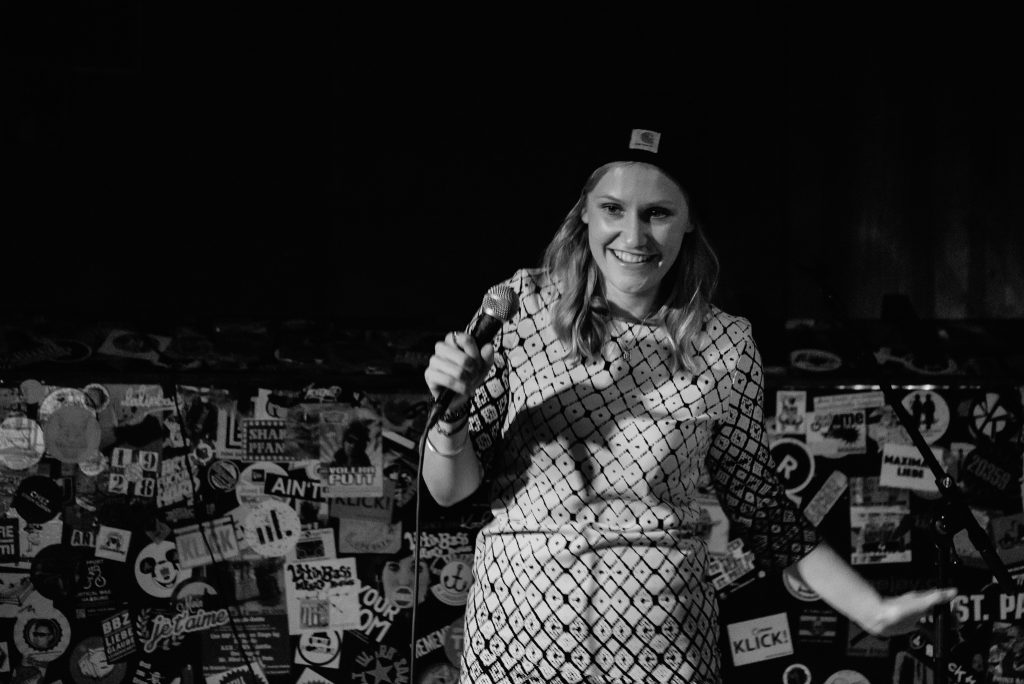 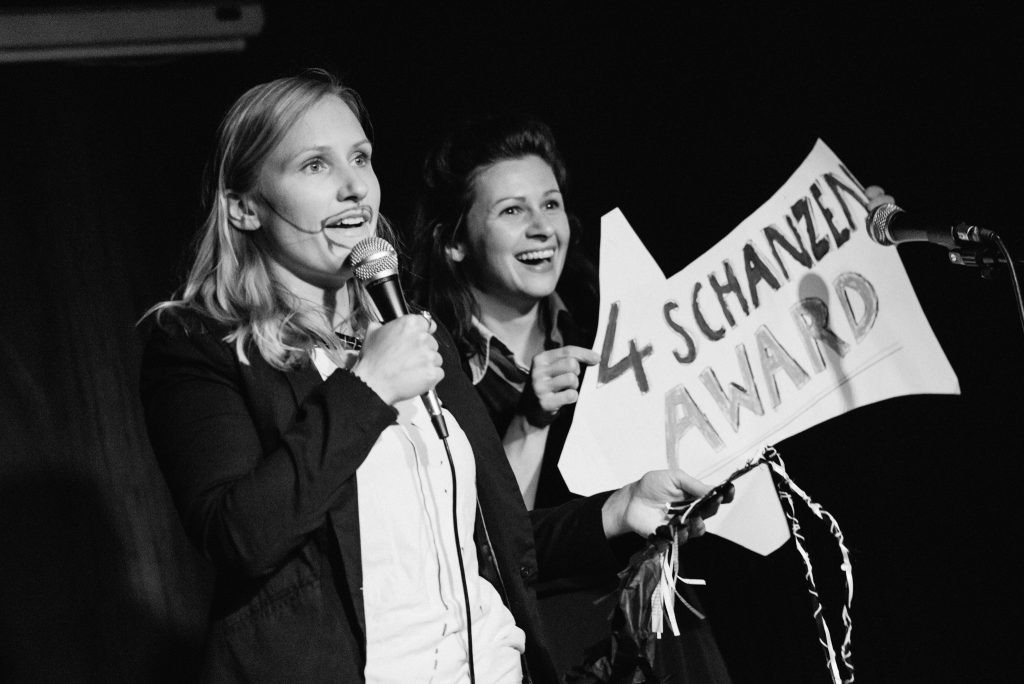 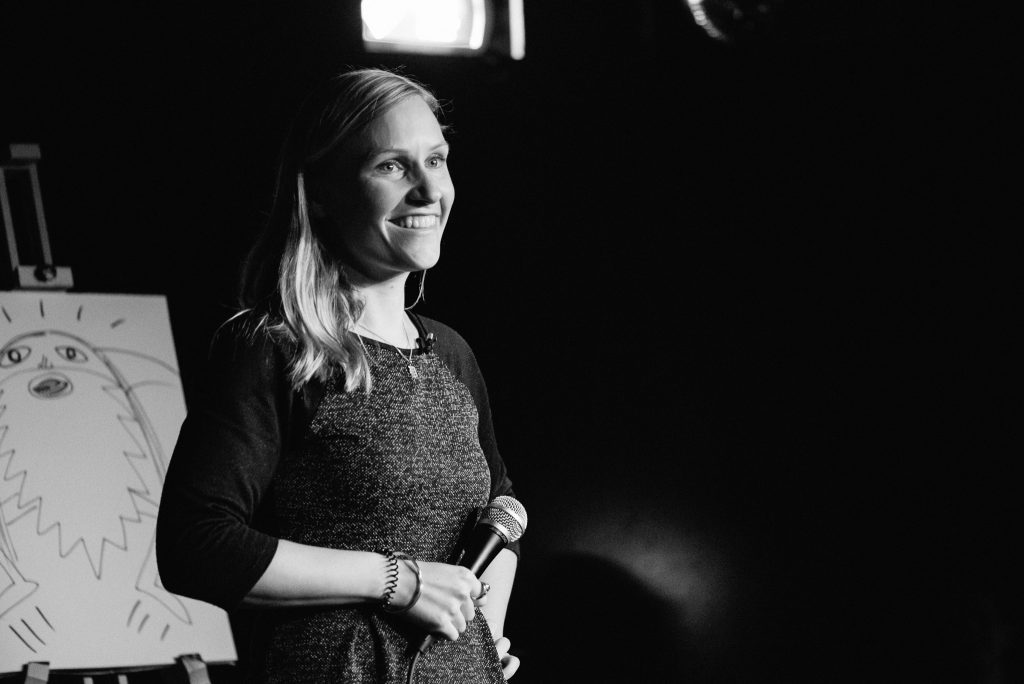 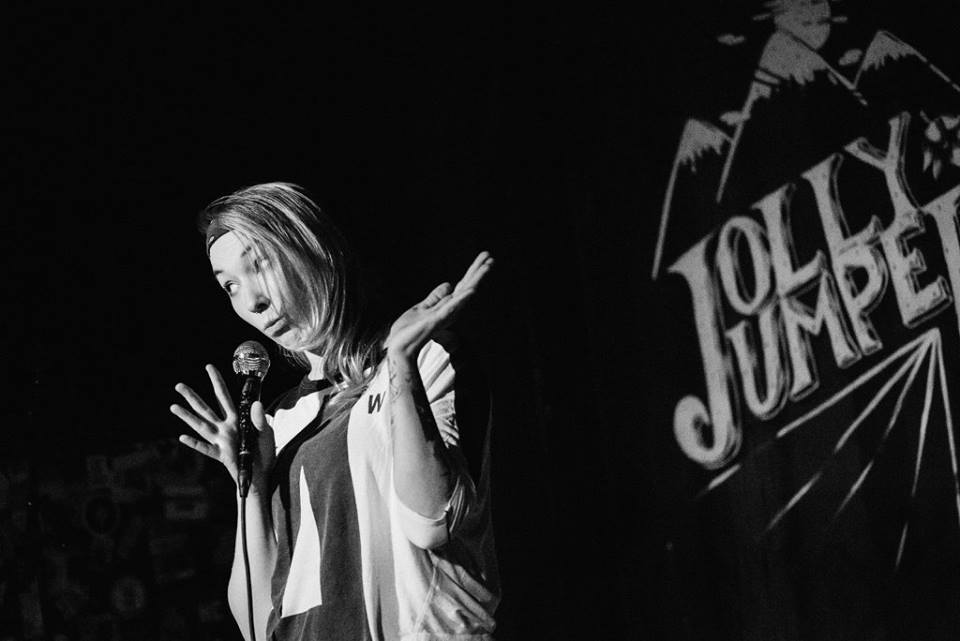 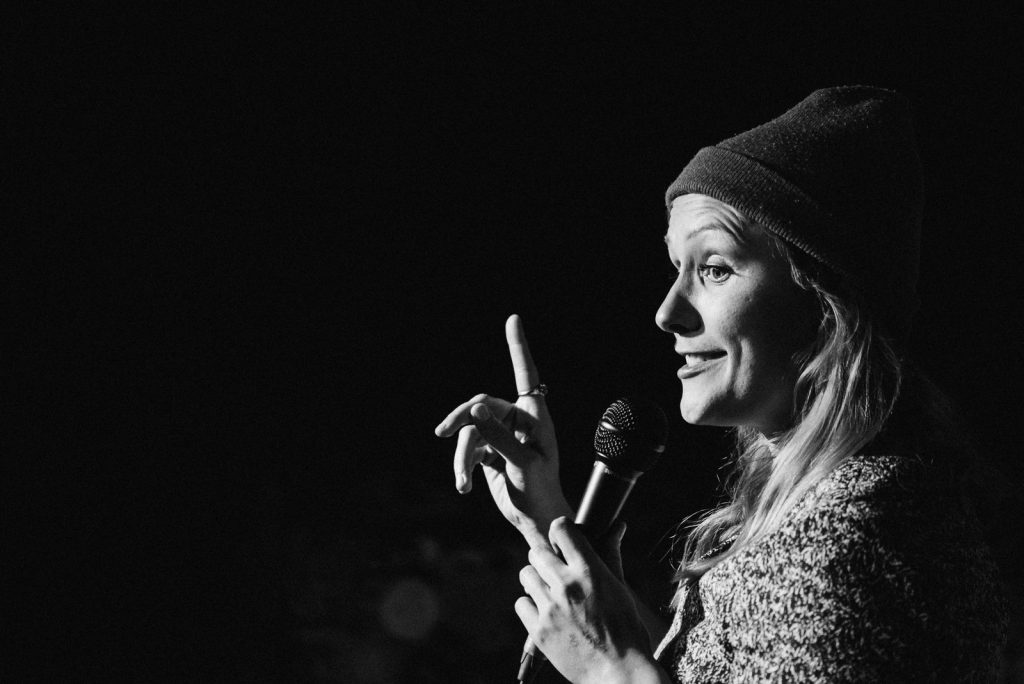 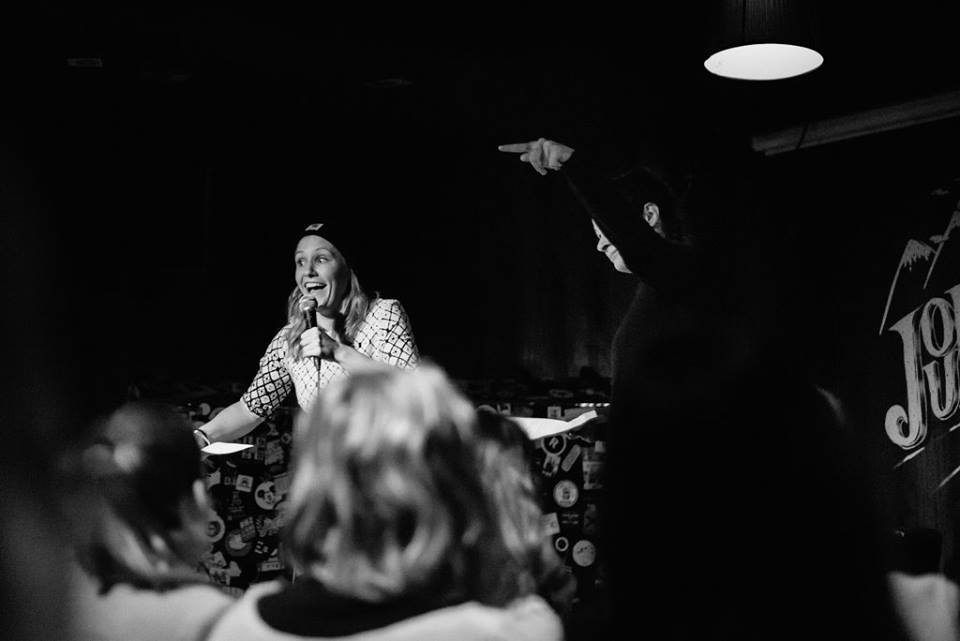 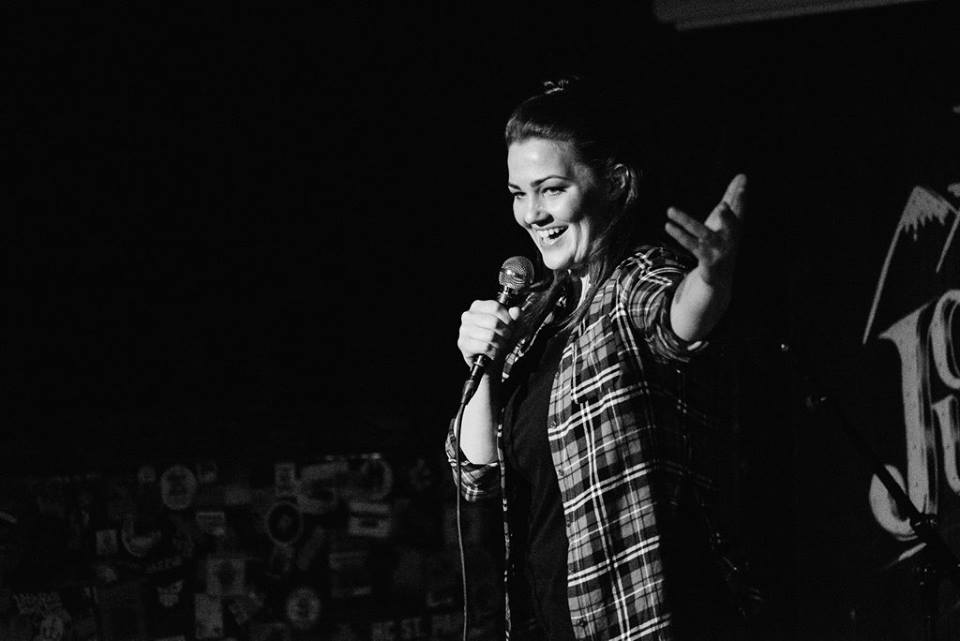 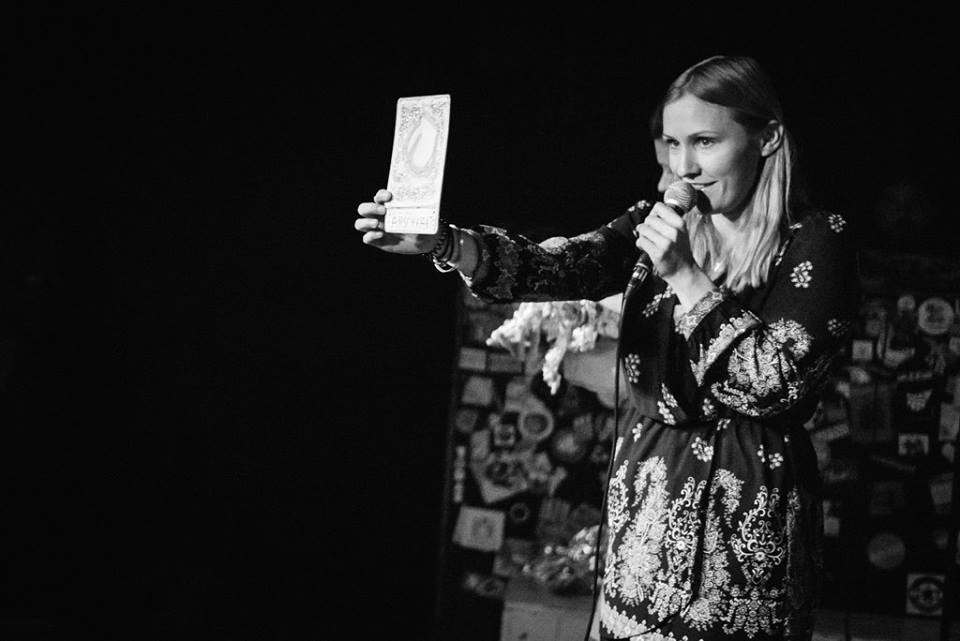 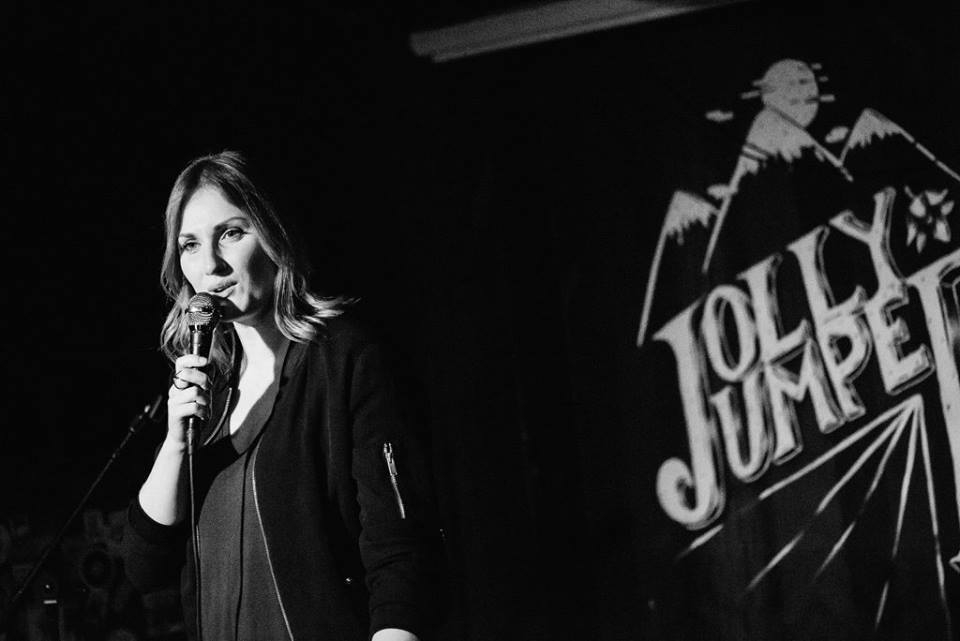 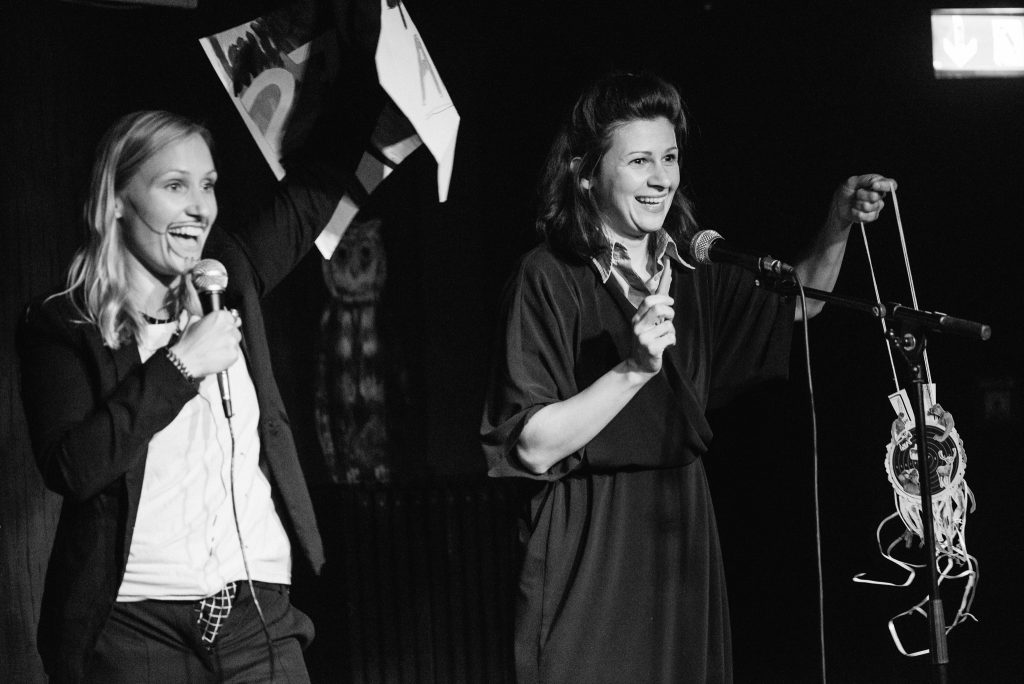 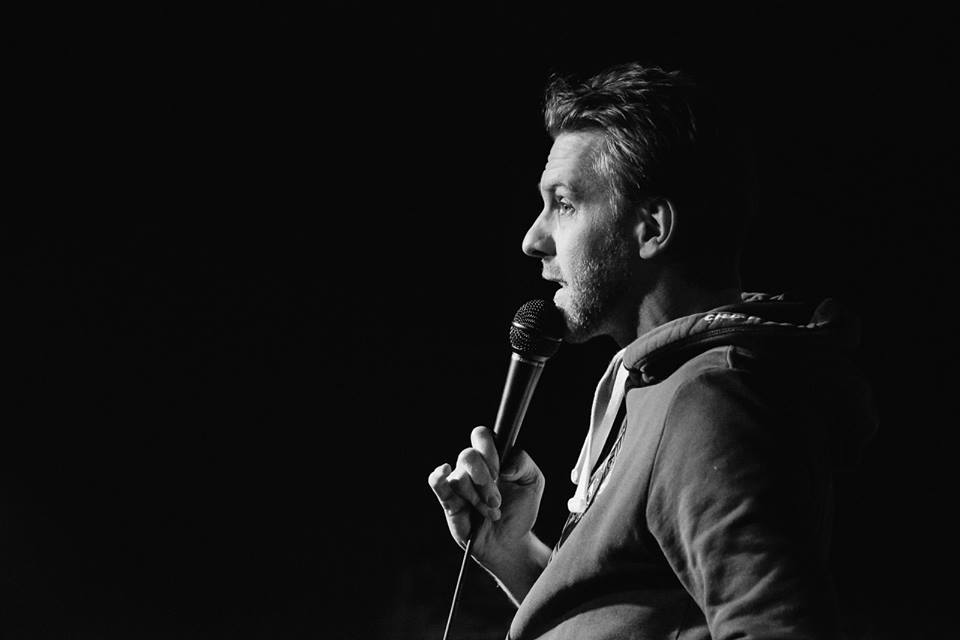 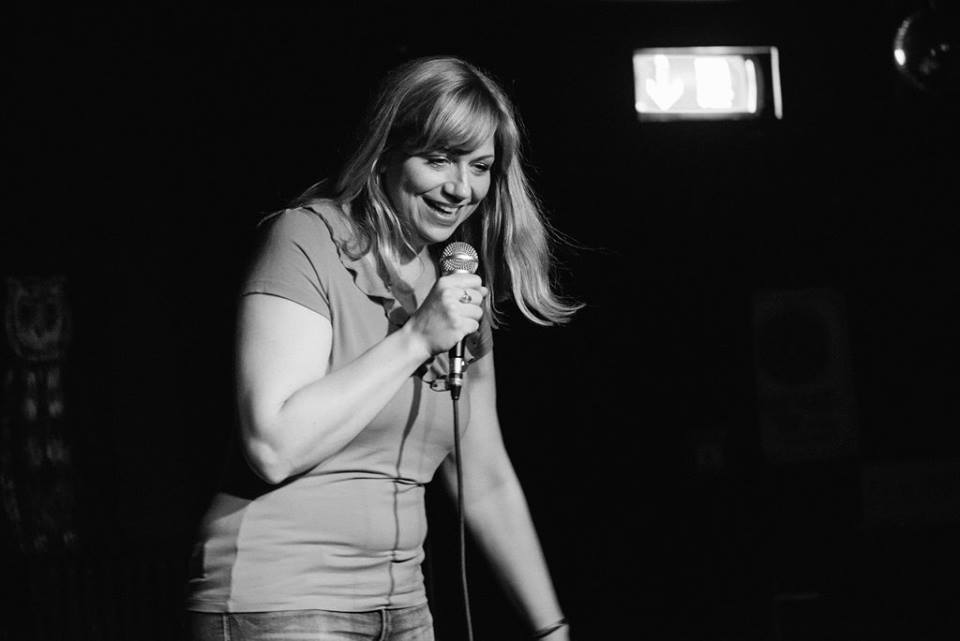 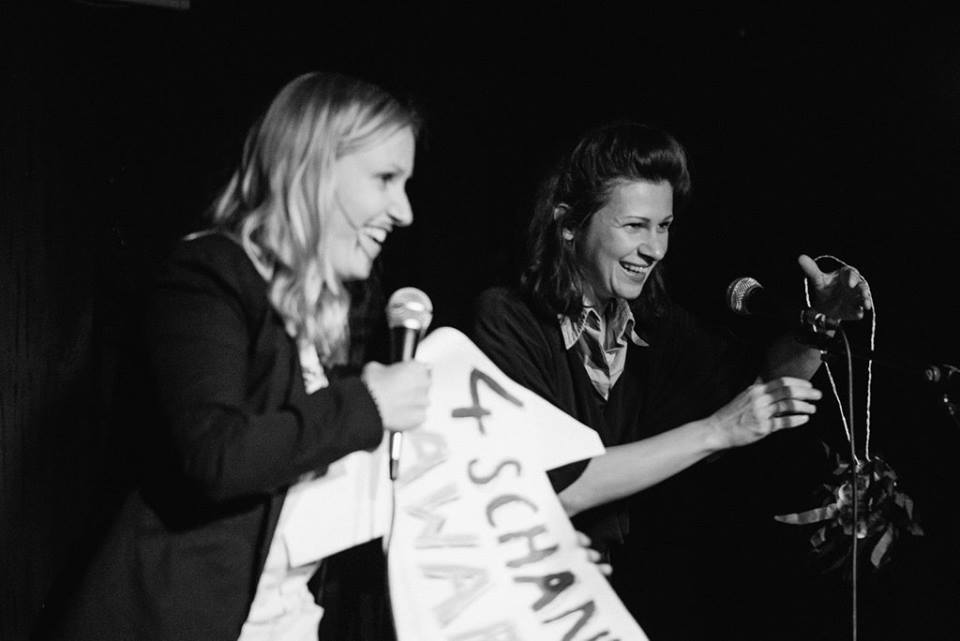 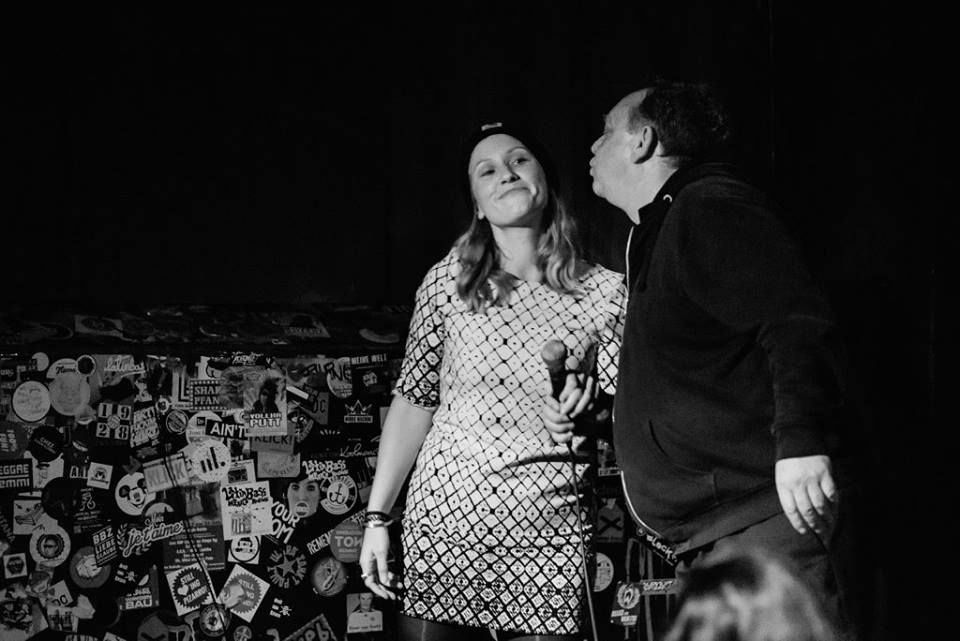 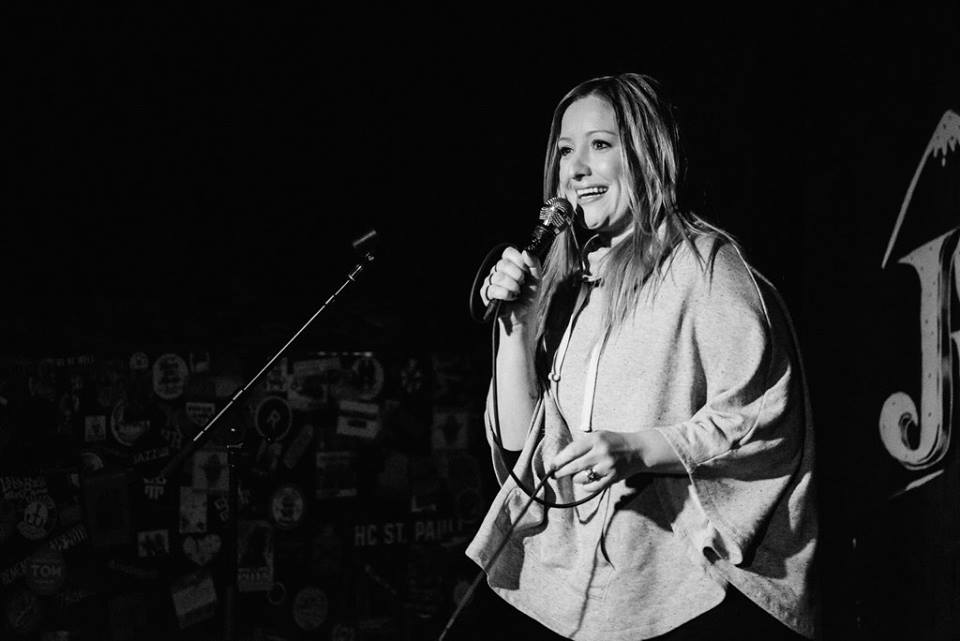 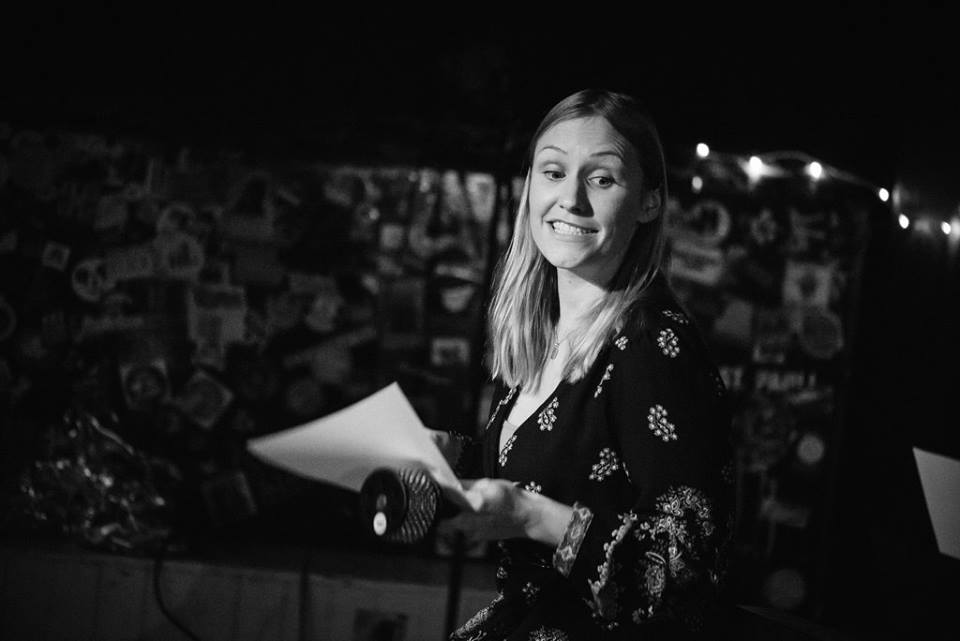 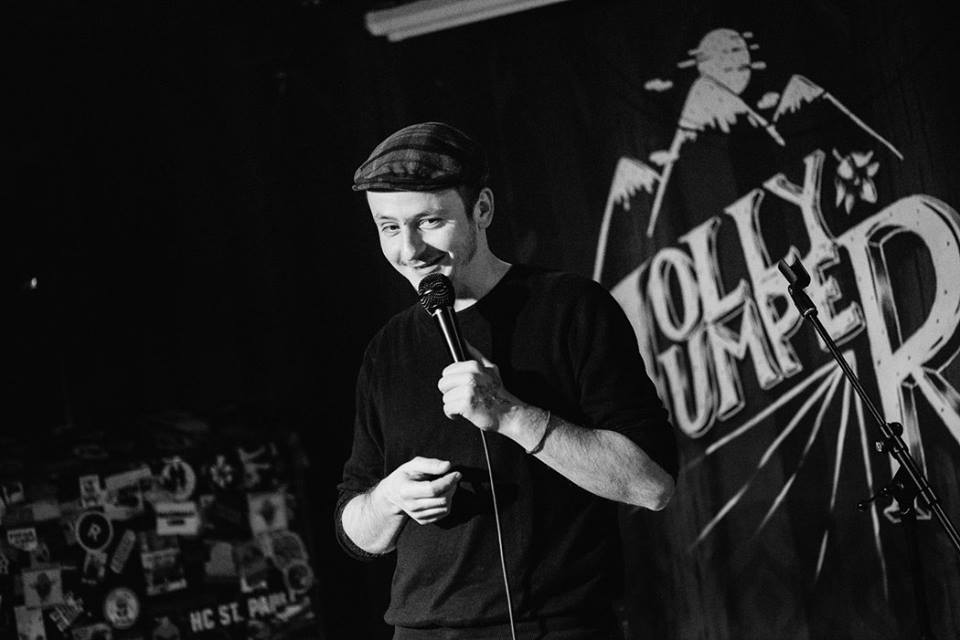 There were several nice things going on these past days. On Saturday, I spontaneously performed at a comedy show in Hamburg. Also that day, my friend from Detroit, currently living in London, visited me. I wasn’t sure if it was a good idea to take her to a German comedy show. Turns out, it was hilarious and she can now tell the world: Germany is catching up in comedy!
Yesterday, I hosted my beloved comedyshow called “Stand-up for the Ladies”. And guess what. You can book more than one woman, if you want to! We had a lovely show with three female and three male comedians.
What would be a blog post without photos? And a show without picture proof that there was a show? Thanks to photographer Sergey Sanin, me and the other comedians got these amazing photos. Check out more of Sergey’s work on www.sergeysanin.de and more of the show’s photos here.

Lastly, after a gig, people that don’t have anything to do with comedy want to give me advice. Well, I myself don’t feel in position to give comedy advice to anyone, either. Better stop reading right now. Though today, I was asked for advice in front of a group of people that want to do stand-up comedy. (Yeah, I accidentally mistook the comedy workshop with the improv workshop but then they started asking me these questions and I kinda liked it). Because it made me think. And I came up with some answers that feel right. At least to me. Maybe to you, too? Did I miss anything? Let me know. Here we go, I made a list. That’s what bloggers do:

– Don’t listen to anyone’s advice unless you want to become that person. Follow advice of people who you appreciate.
– Don’t show a bad attitude. Care for the audience.
– Be present, be in the moment, have fun.
– Fuck up as much as you can. Learn from it.
– What do you really think is funny and why?
– Write everything down that interests you.
– Know yourself. Be yourself. What makes you unique? Could your set be told by any other person?
– Before doing an edgy topic, maybe start talking about yourself first.
– Every bit you put into comedy pays off. Unless you only post selfies.
– You don’t have to know all comedians. Don’t copy anyone. But kinda have an idea of what’s already out there. How can you contribute to the art?
– Identify what you want: Attention? Money? Fame? Or become a good comedian?
– Just do it and see where it takes you.
– Yeah, and of course basics like don’t steal jokes, be kind, speak clearly, learn to hold the mic.

I love hosting comedyshows. And I love hosting comedians.
My guest couch has seen more comics than civilians. And lovers.
If my comedy career won’t take me around the globe, I might as well open a hotel and let the comedy world come here. Last Wednesday, I hosted my Show Stand-up for the Ladies with three comics from out of town.
We had 7 female stand-up comedians in one show, is that German record? And also three amazing male comedians. From a newcomer’s second performance ever to professionals, who have been doing Comedy for decades – Thanks everyone for coming! Next episode is February 22nd. And thanks to Sergey Sanin, we got some great shots from the show (for more pics, click on the link):