Last weekend, there was a major storm in Berlin: trees falling, public transport and flights – heck even my open mic – canceled. Or as my Irish friend called it „a normal day“. And exactly that alert-filled weekend I go on vacation to nearby Poland. We took Polskibus, a cross-border Greyhound, which sounds like a punishment to some, but turned out to be the only way to leave the city. It takes four hours – exactly the time span I can hold it in. The bus driver didn’t want to see any tickets: everyone who wanted got on and we left stormy Berlin. Off to Wrocław, Poland!

Now my website isn’t a travel blog (unless my open mic via dolorosa is a travelogue to you) but I gotta tell you: Wrocław (Pronounced Wruasuaf, German: Breslau) is one hell of a beautiful place. It’s Poland’s fourth largest city and has a more than thousand-year-old touching history. Many notable people, also many Germans, had their start in the Silesian capital: Dietrich Bonhoeffer, Clara Immerwahr, J.F.v. Eichendorff. The entire city is one big witness of history and beauty. And it seemed like they painted their houses just for fall season. The dominant colors red, orange and green were mesmerizing. Even though the weather forecast was grey, we were surprised by sun and expressionists clouds. If the sky was me, people would say stop being so dramatic.

Breslau is a young city thanks to a big old university. All bars and restaurants seem to be operated by teenagers. And work just fine! It seems like, just like in San Francisco, that all senior citizen are somehow kept outside the city walls. We actually wanted to see a concert at the university’s baroque Aula Leopoldina but there was a lecture in Polish instead so we got our money back (after “listening” to the speaker for an hour with utmost confusion).

Traveling as a couple can be exhausting and should be planned accordingly. My boyfriend’s and my interests differed so much! For every bar he dragged me in, I took revenge on him with another art museum. And there are many. For our next trip to Paris, I pray to the French Gods that the Louvre serves Craft Beer – or otherwise Paris will no longer be known as the city of love.

In Breslau, I can recommend the contemporary art museum. It’s located in the outskirts, so on the way there, you can walk through a big communist architecture outdoor museum (it’s not an outdoor museum, just people’s housing).

The art exhibitions are located inside a disarmed bunker. We were about to buy a ticket, when the guy at the counter said „eh, it’s not really worth it. People before paid and then came back to me and complained. So I’m just letting you in for free.“ Geez what were they exhibiting that people complained about? Modern art? Turns out, just not a whole lot, just a few collages and a children crafts table. To me, the best part was a flyer given to us at the end:

Best part about the trip? We saw a guy standing outside KFC with a raccoon on his shoulder. Biggest regret about the trip? Not having taken photos of them. They did seem to know each other since he (the man) talked to his pet (?) (or rehabilitated roadkill?). And then they walked into the KFC. Zero fucks were given by the waiters. He ordered and raccoony helped him to get out the cash from his wallet for his (their?) chicken. 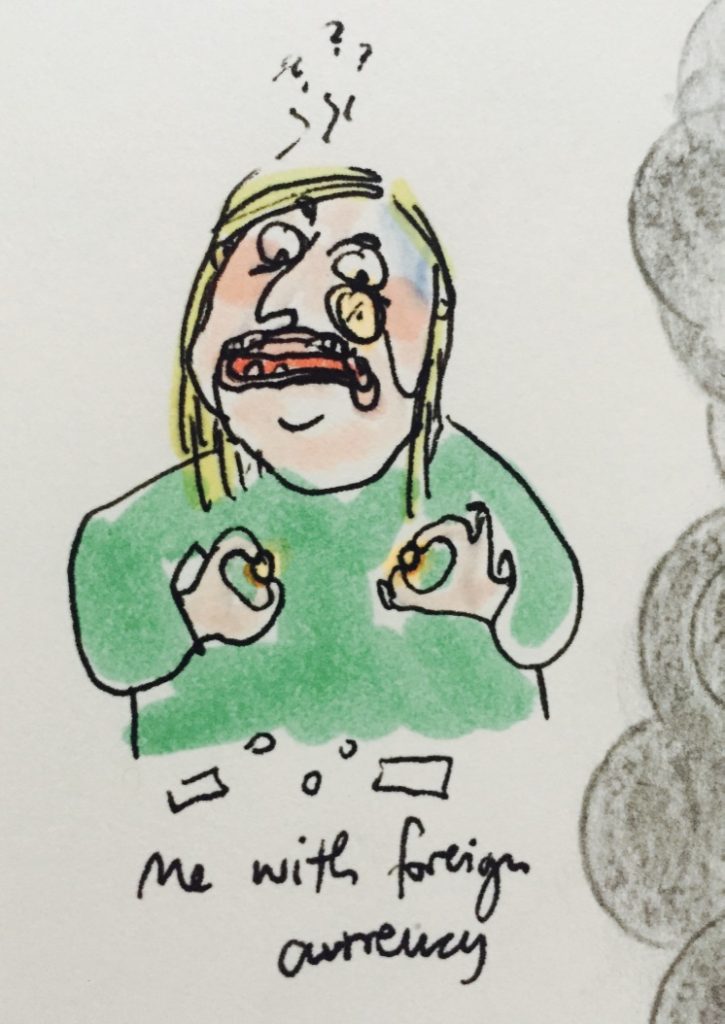 There were surprisingly many KFCs in Breslau, whereas in Berlin, I don’t even know if we have one. But who cares. We prefer local foods when traveling. You thought Germany was sausage country? Think again. Because Eastern Europe is the sausiest sausage area that ever sausaged. I’m a vegetarian, until I cross that border. I just have to. The food is so good!

My favorite food is Borscht. A delicious beetroot soup, with undefinable stuff in it – impossible to comb through for a vegetarian – so I surrender and shove it down my drain. And I love Pierogi. Those heavenly dumplings, steamed or fried, translate to German as „Teigtaschen“. Which literally means „dough bags“. This info made my American boyfriend so happy, we now refer to dumplings solely as dough bags. I ate so many of them, at some point I thought I turned into one myself. Again, it’s almost impossible to be Vegetarian since even the veggie pierogi are decorated with meat.

What else can you do in Breslau? My highlight was visiting the botanical garden. It’s from the university so it’s probably all scientific and stuff but who cares when there is a kids section with dressed up pumpkins!!!!!!! They were styled as spiders, pigs and an apiarist. With my orange jacket and hat, I had camouflage level infinity. Can you spot the biggest pumpkin in this picture?